The precise metrics for forecast-evaluation are described below.

For clinical status, we will use similar metrics to those that proved effective in the CADDementia challenge:

mAUC is independent of the group sizes and gives an overall measure of classification ability that accounts for relative likelihoods assigned to each class. The simpler BCA on the other hand does not exploit the probabilistic nature of the forecasts, but simply considers the accuracy of the most likely classification. Both metrics normalise for group size, which is important because the smallest group (very likely AD at test time) is the most important.

For the other features we will use:

The rest of this page gives the mathematical details of each metric. These are not essential to understand, but useful to make your forecasts as good as possible.

For transparency, we provide in the TADPOLE Github repository the code that will be used to compute these performance measures, both for the main submission and for the interim leaderboard. These are implemented in the Python script evalOneSubmission.py 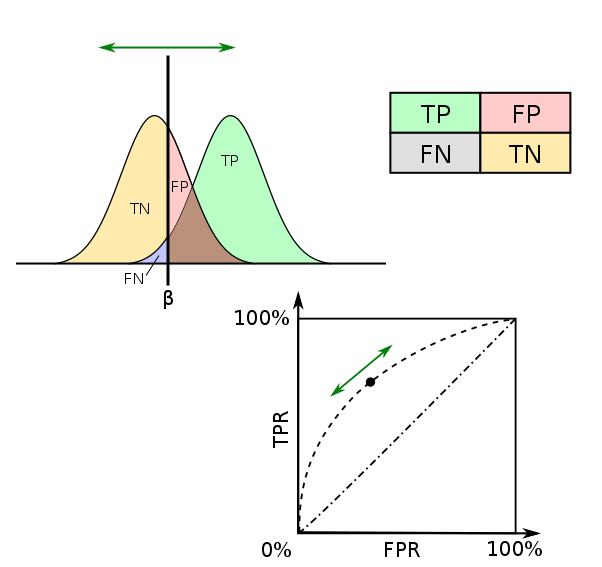 Classical ROC analysis considers only binary classification problems. The theory does extend to multi-class problems such as that posed in TADPOLE's clinical status prediction. The AUC

for classification of a class

are the number of points belonging to classes

is the sum of the ranks of the class

test points after ranking all the class

data points in increasing likelihood of belonging to class

. See (Hand & Till, 2001) for the complete derivation. For situations with three or more classes,

. Therefore, we use the average

The overall mAUC is obtained by averaging equation [2] over all pairs of classes. For

classes, the number pairs of classes is

The class probabilities that go into the calculation of

, which we derive from the likelihoods

provided by the participants by normalising by their sum so that, for example:

First, the data points are assigned a hard classification to the class (CN, MCI, or AD) with the highest likelihood, i.e. the class with likelihood . The balanced accuracy for class

and correctly classified as such, while the false negatives are the data points with true label

The overall BCA is given by the mean of all the balanced accuracies for every class:

For ADAS-Cog13 and ventricle volume, we will use:

is the number of data points acquired by the time the forecasts are evaluated,

is the actual value in individual

is the participant's best guess at

are the participant's relative confidences in their

The key metrics for deciding the winners will be the multiclass AUC of clinical status classification – equation [3] above - and the mean absolute error - equation [7].

However, the other metrics are also important to determine the utility of a prediction algorithm and the published results will rank the performance of each entry on each metric.